A client approached Springboard as they had an issue with a new pen injector. The force needed to administer the drug was too high, making it unattractive for end users. There were several complexities to the design and significant changes to the design were limited by IP constraints. They wanted to understand what they could do to reduce the force most effectively, or if it was even possible with their current design.

We approached the problem from two specific angles.

Firstly, we produced a theoretical model of where energy was lost in the device. We used an interaction matrix to consider all the interactions between components, and for each one, calculated losses due to friction based on geometry, materials etc. 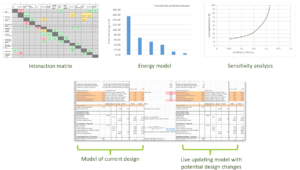 From this we were quickly able to see that the vast majority of the losses came from just a small number of interactions. Much like the Pareto Principle, relatively modest changes to these particular components could have a big impact on the overall force. We were able to recommend a couple of changes to material grade and small tweaks to geometry which we predicted would bring the force down to an acceptable level. Whilst the low-friction materials are more expensive, our model allowed us to target their use where they were most effective and therefore keep the overall cost down.

The second part of our approach was a series of top-down testing. We built a test fixture which allowed us to isolate different parts within the device and measured how the forces were transferred through them on our calibrated force-tester. This allowed us to validate our theoretical modelling for the ‘average’ device, but also understand the variation in real-world parts. We carried out tests on both the original and updated designs and performed statistical analysis of the distribution of results from which we were able to say with confidence that the design changes produced a robust improvement that should meet the user requirements.

Faced with a complex problem and lots of potential solutions, we were able to increase our clients’ understanding of their own design and help them to prioritise their focus where it would have the biggest impact. This, backed up with rigorous test data gave them a clear picture of the possible improvements they could make to meet their end- users’ needs.

Springboard skills used in this project:

Find out more about the type of engineering we can help with. Get in touch with us today.