Development of a new high-performance autoinjector

Prefilled syringes have become the standard format for delivering new biologic drugs.  However, they suffer from various issues, such as:

“Standard” autoinjectors, which are based on a compression spring pushing on the plunger of a prefilled syringe, can solve the first three issues.

The fourth issue is a growing challenge for standard autoinjectors because certain biologics, notably monoclonal antibodies, need to be administered in high concentration for subcutaneous self-administration. This can lead to an increased viscosity of the formulation, which requires greater spring force.  Most autoinjector designs hold the plunger rod back away from the plunger when the device is in storage.  When the device is triggered, the plunger rod accelerates forwards rapidly until it impacts the plunger and creates shock through the system which can break the syringe.

Another source of impact is where some device designs insert the needle into the patient using the main power spring.  This can accelerate the syringe forwards at high speed and cause impact when the syringe is decelerated again.

There are some innovative devices tackling these problems such as the Oval Medical ArQ-Bios which uses a custom primary drug container, or the Consort Medical Syrina AS which uses a liquified gas propellant in place of a spring.  Both have their merits but require the pharmaceutical company to support either a non-standard primary drug container or a non-standard power source respectively.

Another way to manage the increasing viscosity is to dilute the formulation back to a more reasonable viscosity and deliver a larger volume injection. Several platform autoinjectors are now available in 2.25 mL syringe formats. However, the change from the 1 mL to the 2.25 mL syringe formats tends to require substantial changes to the device. Changing the CAD models and manufacturing a new set of tools for almost all components entails an increased risk, time delay and cost.  Further, in general they cannot support injections greater than 2.25 mL.

There is, therefore, the need for a new autoinjector which:

Why use a cartridge in an autoinjector?

Pharmaceutical cartridges are used widely to deliver drugs such as insulin, fertility hormones and growth hormone.  They differ from the staked-needle syringe in that cartridges have an elastomeric septum seal at one end rather than a needle.  Also, cartridges do not have the flange seen on syringes.

The main differences relevant to this discussion are summarised in Table 1.

Typically cartridges are not used in early clinical trials.  However, they could be used by either fitting an adapter to add a needle and plunger rod, or by using the autoinjector that we will introduce in this article.

Why pressurise the drug in storage?

Most spring-powered devices cause an impact when the spring is released.  This could be avoided entirely if the spring was already pushing on the plunger, thus pressurising the drug during storage.  The advantages of this approach are:

But could storage under pressure damage the drug? Testing at a pharmaceutical company has shown that there has been no degradation in their drug when stored at maximum pressure over the 3-month time period studied.  There is no reason to believe that there will be a different effect with longer duration.  In fact, the reduction in bubble number and volume discussed above should reduce degradation.

The “NIS” autoinjector from Midas Pharma (see figure below) is a cartridge-based autoinjector wherein the spring is always pushing on the plunger. 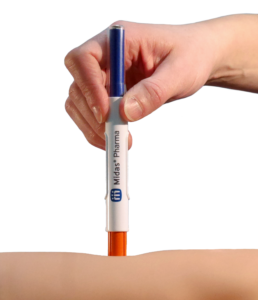 The simplicity of the NIS design (see figure below) means that:

The design is so simple that it is possible to remove even the step of removing a cap, which would make the NIS autoinjector the first “one step” autoinjector on the market (Figure 3). 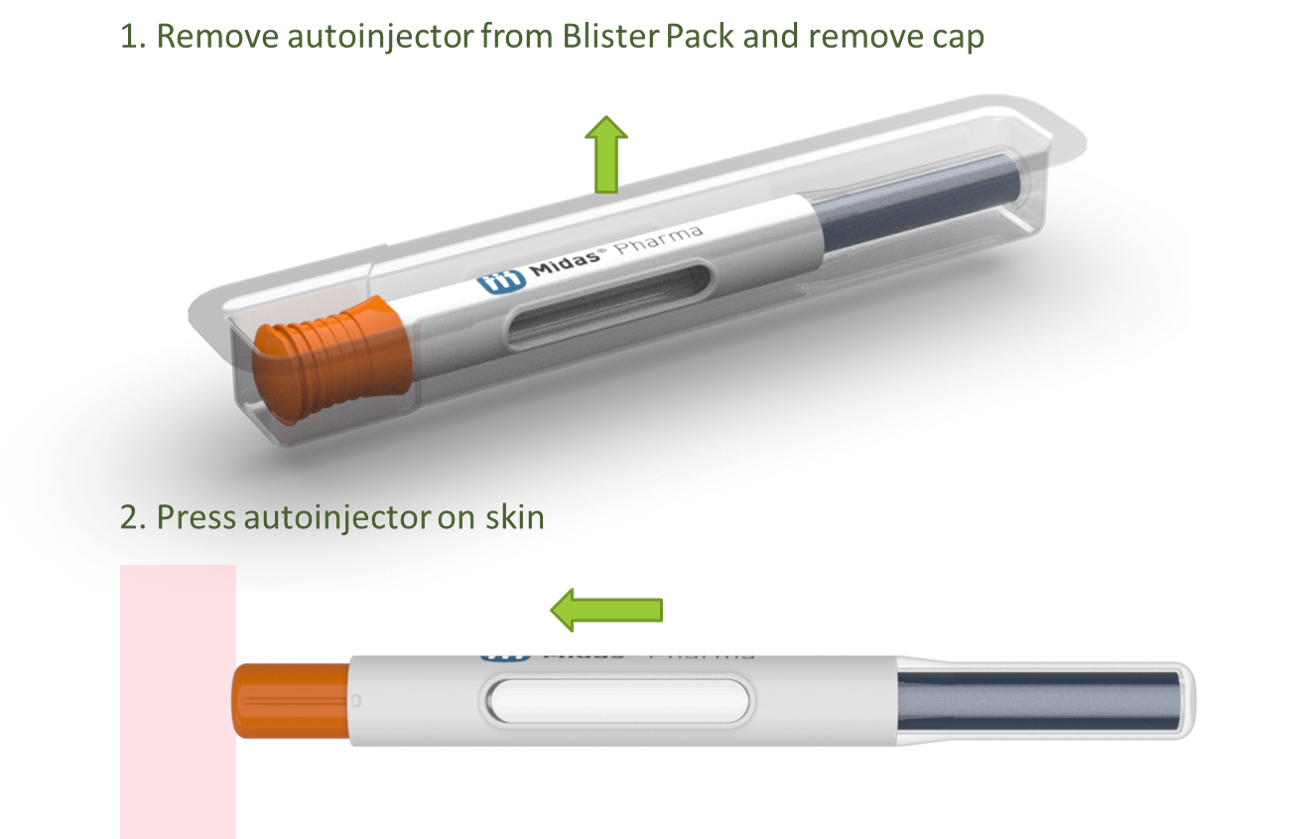 How can we predict autoinjector performance?

Our primary considerations are that the autoinjector should:

In order to answer the second point, we would like to know the maximum viscosity each autoinjector design can deliver through a given needle gauge in the maximum allowable injection time limit. 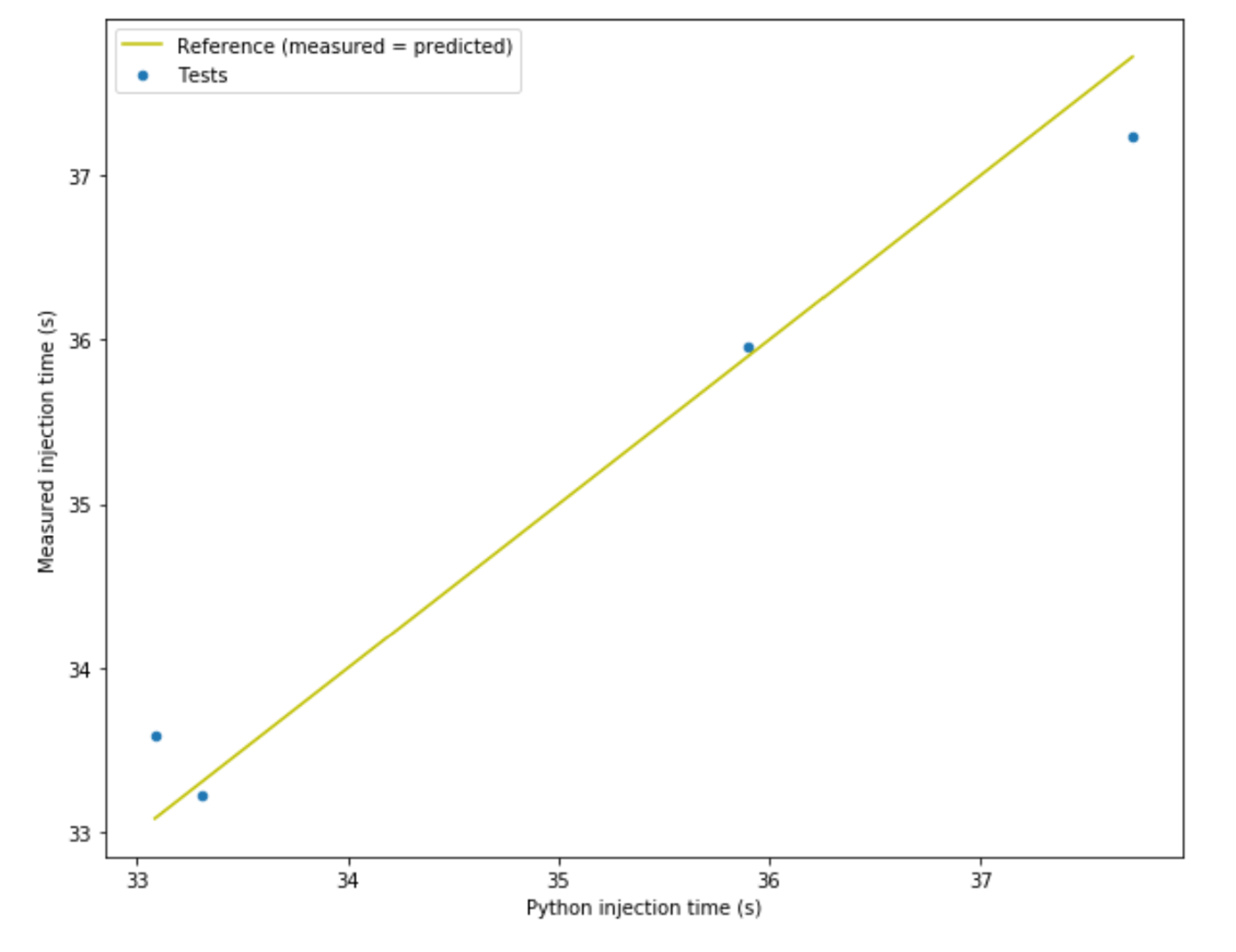 How does the NIS autoinjector compare with competitors?

We could use the equation above to calculate the maximum viscosity which each autoinjector can inject in a given time through a given needle diameter, but that would assume that every parameter was at its mean value and would take no account of variation.

But we want all injections to be under a given time limit, so we care about the slowest injections, not the mean.  We need to calculate the distribution of injection times.

We could use algebraic manipulation, but this is challenging and would become very challenging if any of the input distributions were not Gaussian. Instead, we can use a Monte Carlo simulation.  For those who are not familiar with this method, the steps are:

The validity of the Monte Carlo method depends on several factors being true:

We used the Monte Carlo method to calculate the maximum viscosity that could be injected by the NIS autoinjector and 3 competitors for various needle gauges with no more than 1% of injections taking more than 15 seconds. 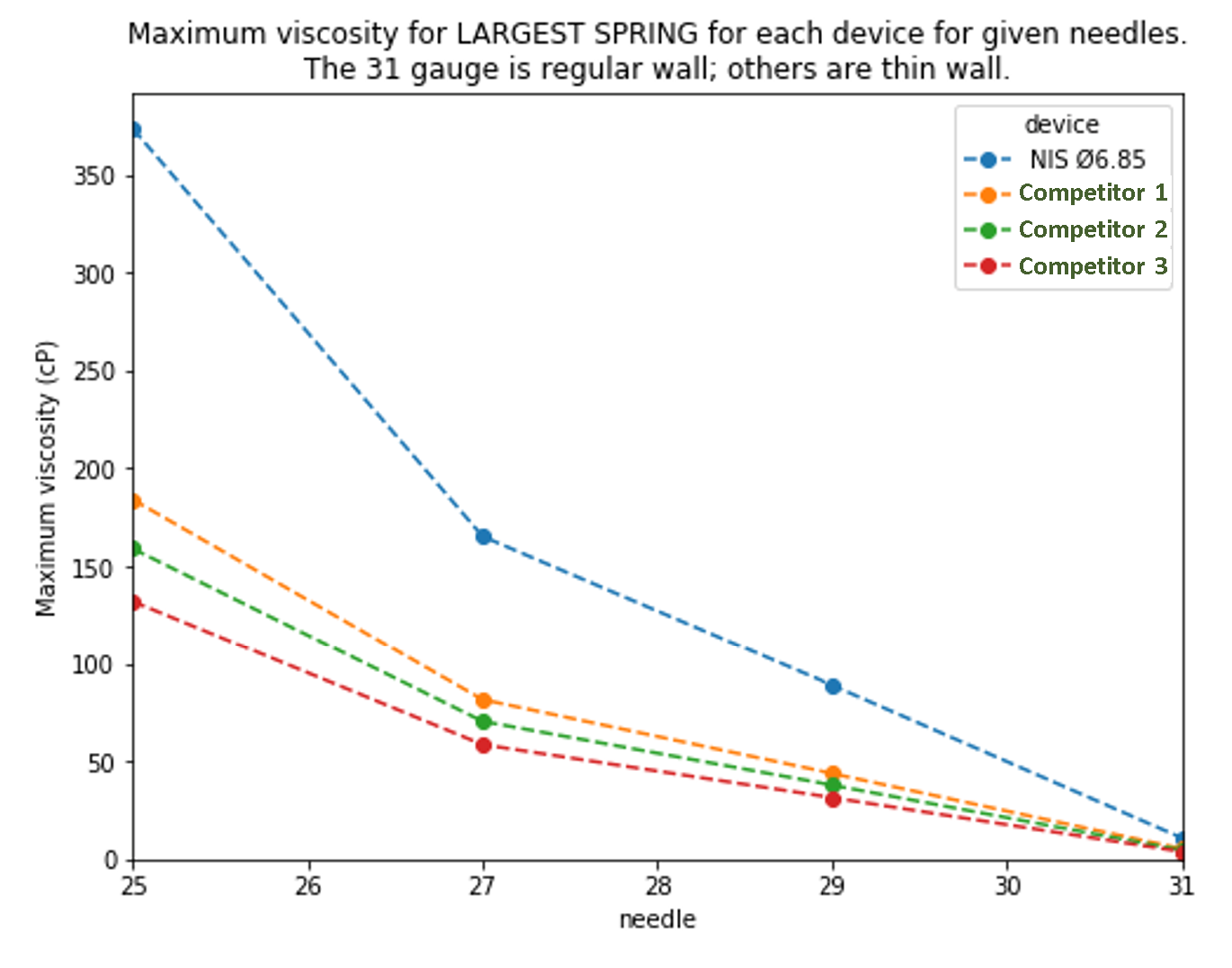 The results above show that the NIS autoinjector could inject significantly higher viscosity drugs than competitor devices. Alternatively, a similar viscosity could be delivered by the NIS through a smaller needle than competitors.

Competitor devices would probably have unacceptable risks such as plastic creep or glass impact if they used the maximum force spring that could fit.

There are demonstrable advantages to using a cartridge over a syringe in an autoinjector, as described in Table 1.

Furthermore, pressurising the drug in storage can eliminate impacts and reduce drug degradation. Elimination of impacts means that the autoinjector could be designed to deliver higher viscosities and/or volumes than competitors that are on the market.

The NIS autoinjector embodies these ideas in a simple and low-risk design.